Home > About Angel > What is Yeast

Angel Yeast
What is Yeast

●About 4000 years ago ancient Egyptians used yeast to make bread. 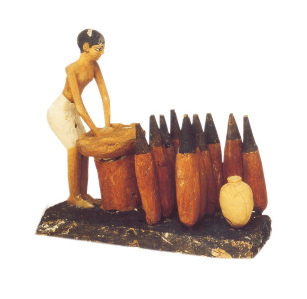 The left picture shows the bread made by ancient Egyptians. This Egyptian(right) was preparing beer barrel. 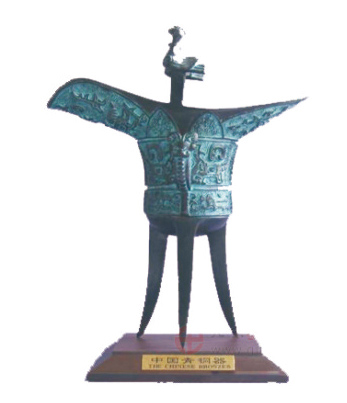 ●As early as the Yin and Shang dynasties ancient Chinese used yeast to brew liquor. In the Han Dynasty Chinese began using yeast to make steamed bread cake and other pastries; 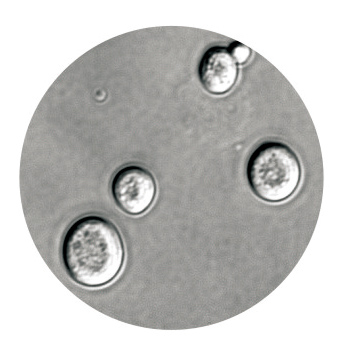 ●In 1680 Dutchman Antonie van Leeuwenhoek observed yeast under a microscope for the first time. 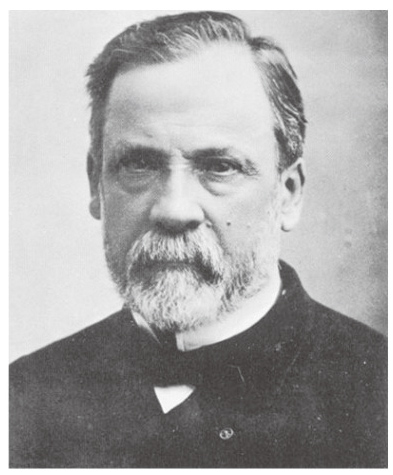 ●In 1846 the first industrialized production of yeast began in Europe.

Origin of name of yeast
The word "yeast" comes from ancient Indo-European word gist or gyst meaning boil foam or bubble which vividly describes the function and effect of the matter yeast in brewing and fermentation.

The Chinese characters "酵母"  first appeared in the Song Dynasty in a Chinese book on brewing which documented the method for collecting yeast microbe from the surface of the liquid in the brewing jar with full fermentation and the yeast microbe is called .Structure and nutritive 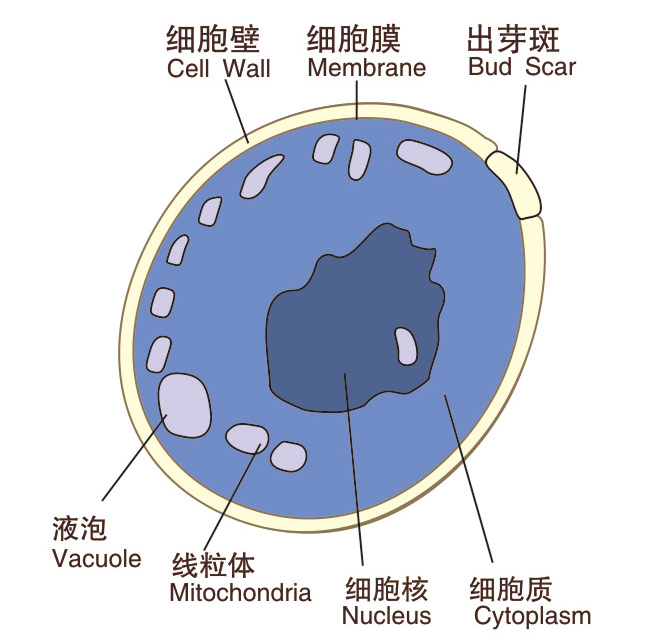 The yeast used in daily life is a single-cell microbe shaped like an egg. The size of yeast cell is only 5-8μm. Due to its tiniest minuteness a yeast cell is visible only through a microscope.

The outermost layer of yeast cell is the cell wall which plays a major role in protecting the cell and is mainly composed of glucan and mannan.

Through modern technology we can open the cell wall to reach the content of a yeast cell and obtain YE yeast extract through zymolysis. Yeast extract contains proteins peptides amino acids nucleic acids B vitamins and trace elements etc. 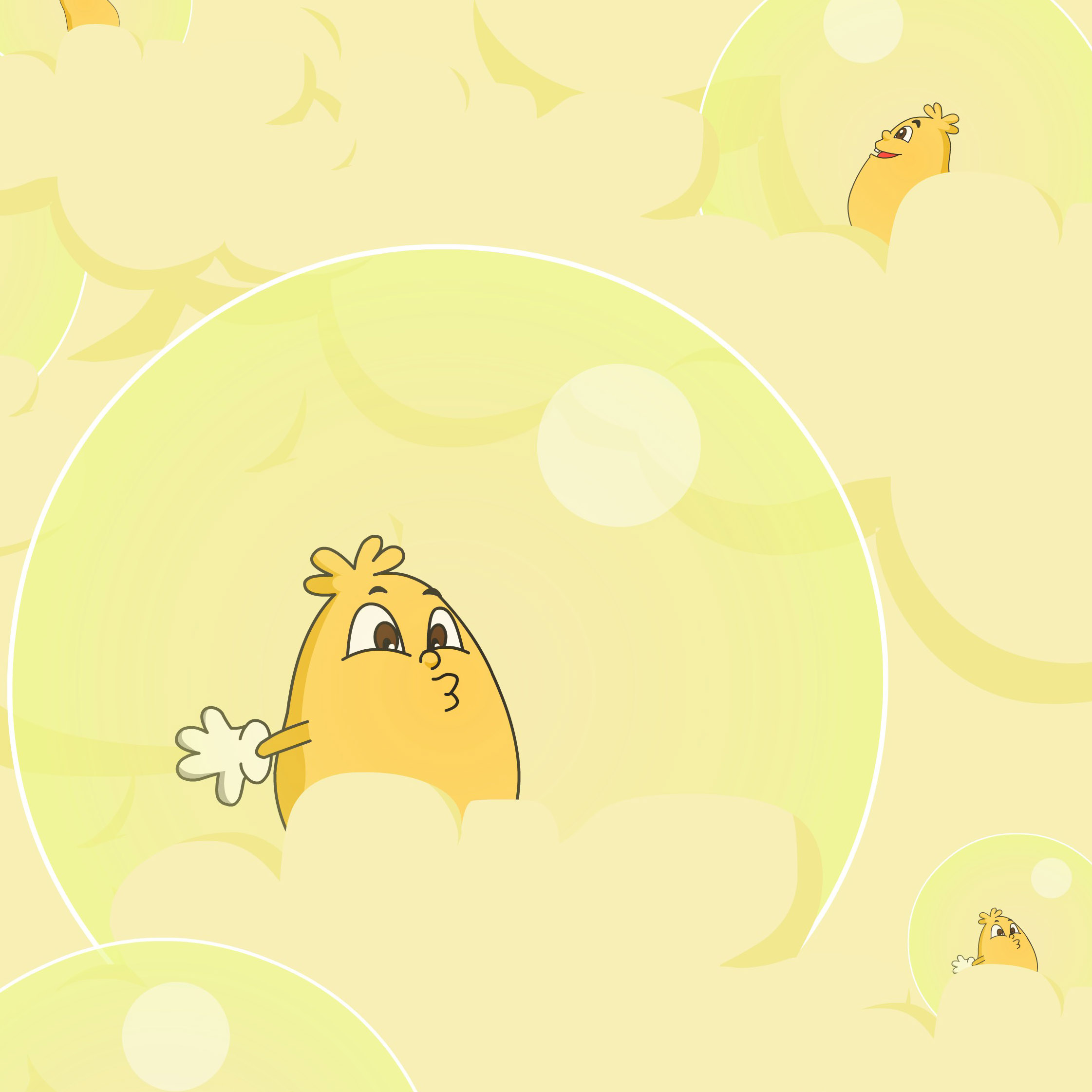 Two living modes of yeast
Anaerobic environment
In the anaerobic environment the yeast breaks down the sugar and releases carbon dioxide in a process known as fermentation. In the process of leavening dough the yeast in the dough begins transforming the sugar in the flour into alcohol volatilized in baking and carbon dioxide after oxygen has been depleted so as to expand the dough.
Sugar--> CO2 + alcohol + a little energy

Aerobic environment
In the aerobic environment the yeast breaks down the sugar into carbon dioxide and water and obtains plenty of energy required by growth which accelerates the reproduction. This principle is utilized to produce yeast microbe in large quantities.
Sugar + O2--> CO2 + water + high energy

As an important innovation in the development of the yeast industry YE yeast extract has been surging ahead since the 1990s. Worldwide production is estimated at more than 100000 tons per annum on a dry basis and the prospects for YE application are brilliant. 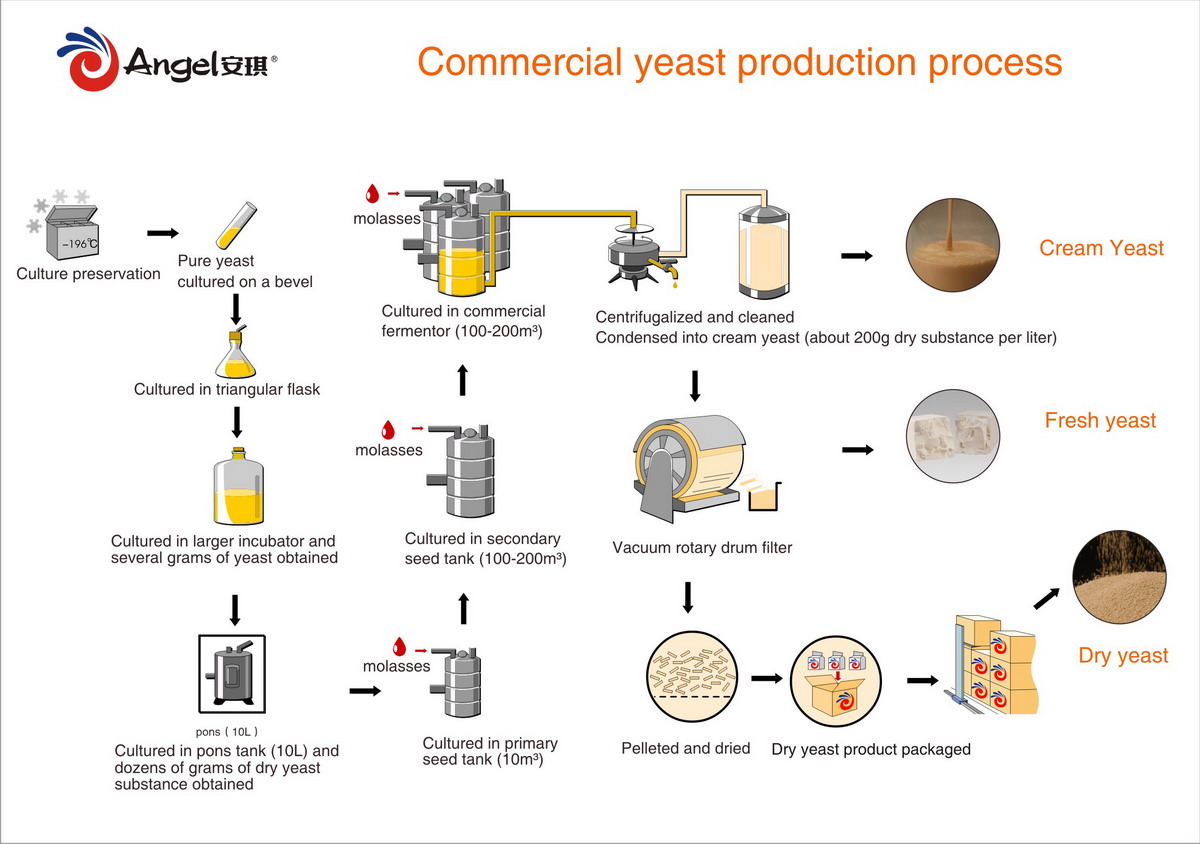 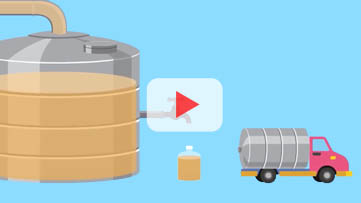 Yeast Protein – a high quality protein source which is reliable, sustainable, and eco-friendly

The yeast industry is the model of a circular economy. The sugar cane and beet molasses are the nutrient source of yeast, and the industrial wastewater of yeast production is the source of organic fertilizer for crop production. (Fig.8) Angel provides cost-effective products for its customers, while maximizing the social benefits to support and promote the sustainable development of the yeast industry.

As a high-quality protein source which is reliable, sustainable, and eco-friendly, AnPro is positioned to close the protein gap. With features of non-animal, non-GMO, dairy free and soy free, AnPro is suitable for diets of vegans, vegetarians, and flexitarians, as well as people interested in weight management, sports nutrition, healthy ageing and healthy lifestyles. Human demand for protein will no longer rely on animals and plants sources that consume high resources. As microbial sources, AnPro will play an increasingly important role in maintaining the health and sustainable development of the earth.

CreamYeast
Intended for large industrialized bread makers and transported by tank truck;
Highly viable and economical;
Can be stored for 10-14 days at refrigerating temperatures of 2-4℃

Fresh yeast
Cubic yeast products containing about 70% water;
Powerful dough leavening capacity;
Can be stored for about 1 month at temperatures of 0-4℃

Compared to the fresh yeast, it has longer shelf life, with storage conditions at -18 degrees,  it can be preserved for 2 years 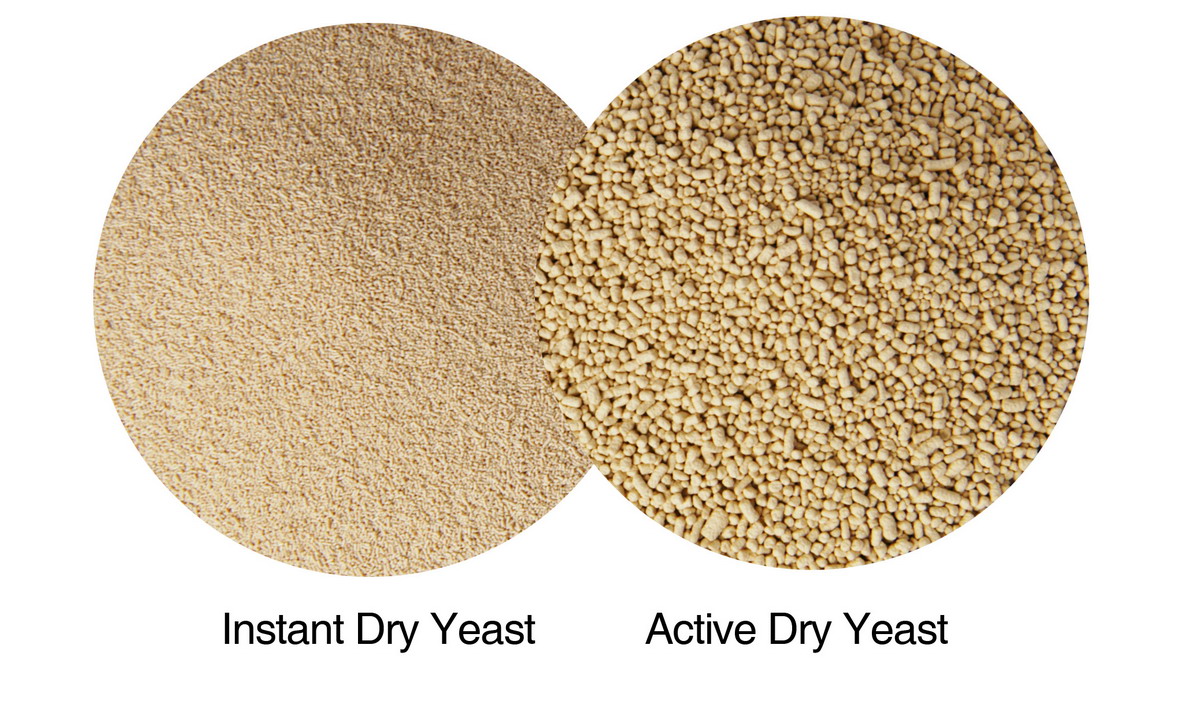 form of granules or spherical particles. It offers excellent stability at ambient temperature, a characteristic which makes it very popular in those parts of the world where climatic conditions are less than favourable (i.e.  high temperatures and humidity levels).

Yeast is a great contribution to humanity 2. Yeast is a bio-factory which contributes many ideal products to Human 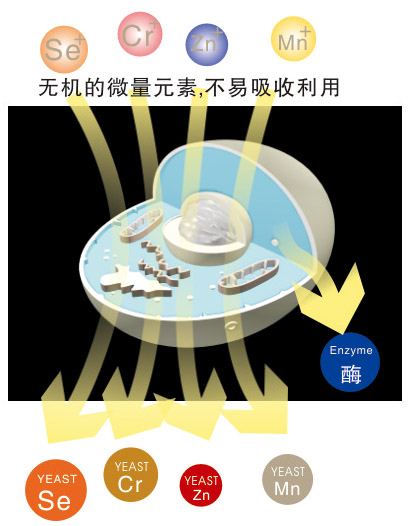 minerals, such as zinc selenium chromium, into organic selenium yeast, chromium yeast and zinc yeast, to provide human with ideal source of minerals with high bioavailability.

Yeast contains high levels of various nutrients. In the yeast factory people can enrich the yeast as they need and make the yeast rich in B vitamins or nucleic acid so that people can develop health product with high content of B vitamins or nucleic acid;
Yeast is also the good expression carrier of genetic engineering. People utilize the simple life structure stable information expression good fission reproduction of yeast to produce many genetic engineering products in the yeast factory such as various biological vaccine organic acids etc.

Yeast is a globally recognized safe food
Yeast is the best food and the most natural antidote. 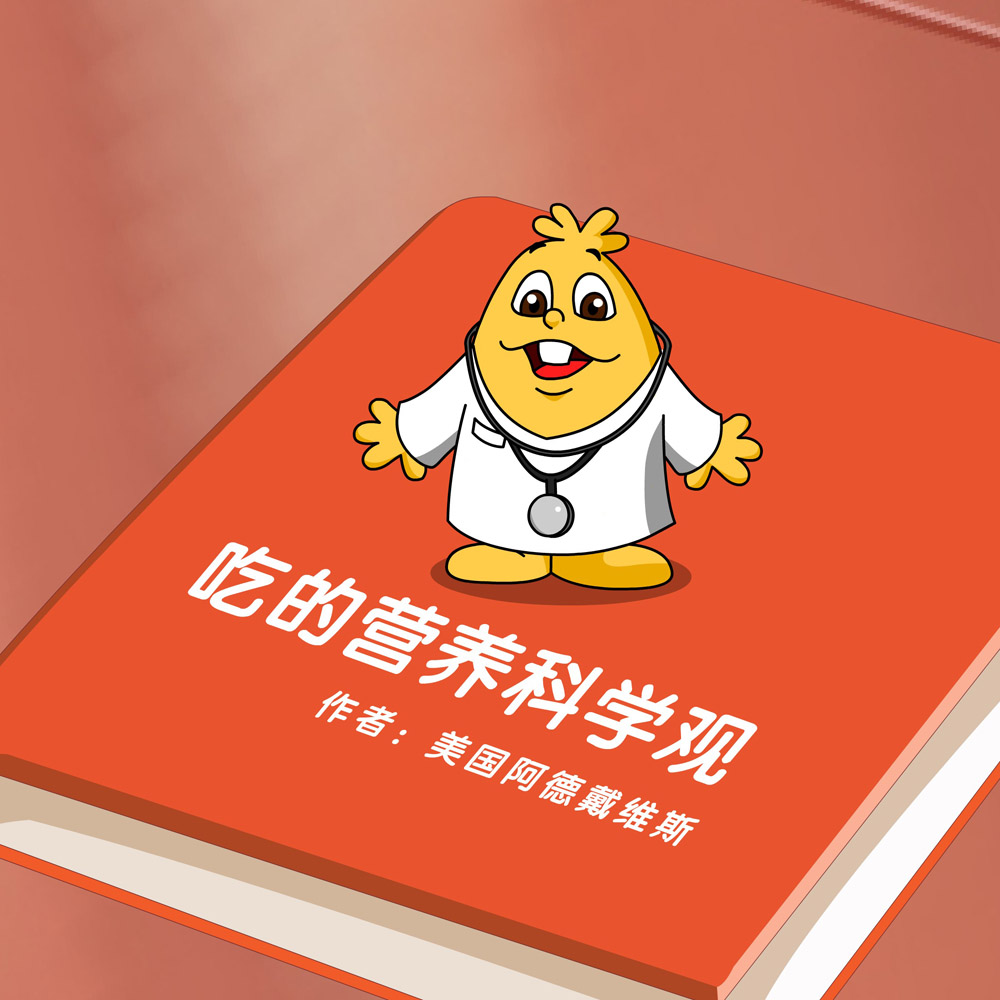 Yeast powder can improve the condition of most people in the world caused by nutritional imbalance
--American nutritionist: Adelle Davis

Yeast is almost the only natural food integrating rich high-quality protein and a complete range of B vitamins in the current nature.
--Japanese famous nutritionist:  Akazawa

Application fields of yeast
I. Food industry
1. Food fermentation
The bread and steamed bread made of yeast are more nutritional healthy and hygienic.

Yeast transforms the carbohydrate decomposed by starch in the flour into carbon dioxide and other chemical elements and makes the dough fluffy under the effect of the gas. Yeast fermentation natural nutritional convenient and fast fundamentally resolves the shortcomings of traditional fermentation method such as sour dough fermentation, low fermentation unhygienic and easy to turn sour.
The alcohol produced by breakdown of sugar gives the dough a special flavor and enhances the taste of bread and steamed bread.
In the fermentation process yeast can also break down the phytic acid in the flour that inhibits human body to absorb minerals and allow people to easily obtain mineral nutrition as calcium iron zinc etc. 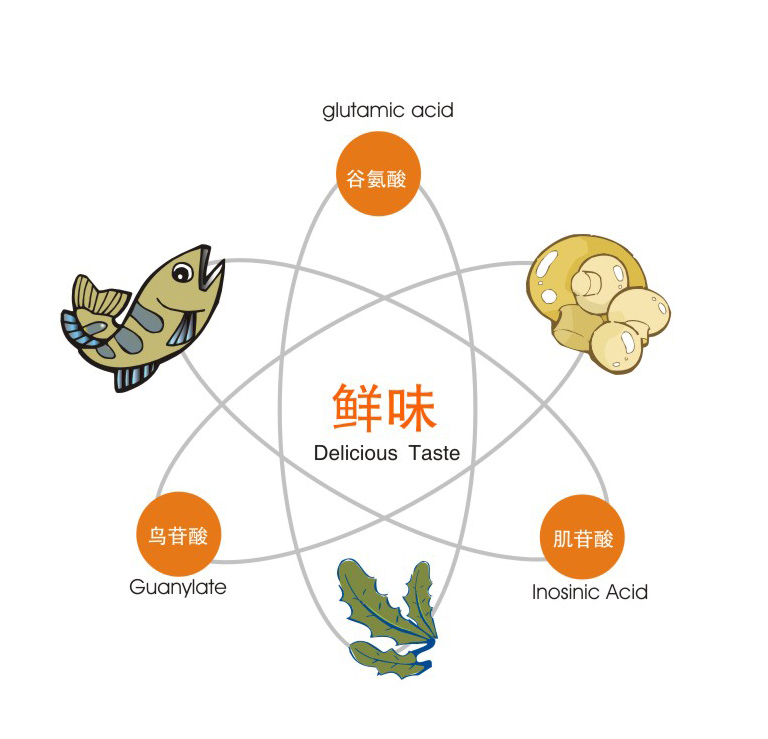 Scientific research has found that the pleasant taste that people can feel mainly comes from three substances: glutamate inosinic acid and guanylic acid.

Kelp is rich in glutamic acid champignon is rich in guanylate and carp is rich in inosinic acid. The combination of the three substances will form the most enjoyable taste.

Taking the natural edible yeast as the raw material YE yeast extract adopts modern bio-technology to decompose the protein nucleic acid etc. in the cell into nutritional flavoring which is rich in a variety of nutrients as glutamic acid inosinic acid and guanylic acid as the international popular new top-grade flavoring. In the developed countries and regions YE has replaced traditional flavoring and been widely applied in food and flavor as an important iconic ingredient with clean label. 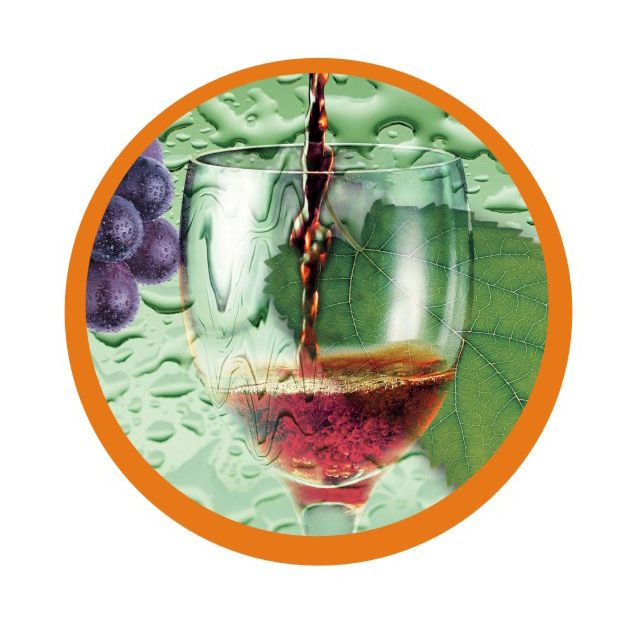 The reason why yeast can transform sugar into alcohol is that the yeast cell contains some proteins known as enzymes. These enzymes are good biological catalysts which break down the organic matter as glucose and other carbohydrates provide the energy required by their activity reproduction and the metabolite forms alcohol as a result of biochemical reaction. 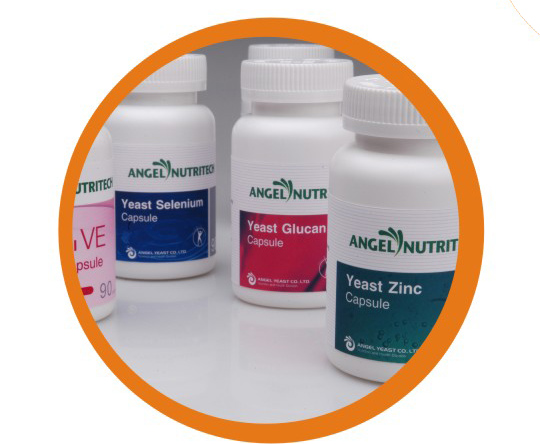 The polysaccharide material such as beta-glucan in yeast cell wall is a highly active immune substance and an ideal immunopotentiator. Yeast is also a source for health actives such as nucleic acids, glutathione, peptides etc.

All of those nutrition characters make yeast an ideal ingredient which can be widely applied in health foods, dietary supplements and medicines.

III. Industrial fermentation
New bio-energy: Fuel Ethanol
With the current energy shortages around the world the production of fuel ethanol through yeast fermentation has become an inevitable trend.
In the alcohol thick mash fermentation the yeast can transform the sugar in cassava cereal crops into fuel ethanol with the thickness of 96%. At present the technology using timber waste paper straw and other cellulose as raw material and utilizing yeast fermentation to produce new energy has achieved great progress; this invention can effectively obtain ethanol from cheaper raw materials and this new energy will gradually replace gasoline fuel due to its unparalleled advantages.

Biological medium
As a high-quality organic nitrogen source of culture medium yeast extract YE is a powder paste or liquid product rich in protein amino acids small peptides nucleotide B vitamins trace elements and other nutrients produced by bread yeast beer yeast or wine yeast in the process of autolysis or enzymatic hydrolysis through a separation and concentration or spray-drying process.

At present as an important culture medium source yeast extract is widely applied in the laboratories and factories.

Chiral drug synthesis
The oxidoreductase in the yeast cells is a chiral synthesized catalyst which can catalyze and reduce the substrate with carbonyl and synthesize chiral products with optical activity. According to this principle yeast has been widely used in the catalysis and synthesis of chiral drugs as Tomoxetine/Fluoxetine &beta;-lactam antibiotics L- Carnitin paclitaxel fenfluramine aminoglutethimide etc.

IV. Animal nutrition and health
Yeast has become one of the most extensively used microbiological feeds in the global breeding industry.

V. Petrochemical industry
Yeast can selectively utilize paraffin in the oil as carbon source so as to reduce the paraffin content in the oil product reduce the solidifying point improve the oil fluidity at low temperatures; as such it has successfully applied in the production of oil with low a solidifying point. Yeast can also be used to decompose pollutants the ocean rivers lakes and bodies of water. .