Yeast beta-glucan exists in the cell wall of yeast and is well-known for the functions of immunity enhancing, anti-infection, anti-tumor and so on. As the No. 1 yeast extract manufacturer in the world and relying on its strong R&D capabilities, Angel Yeast developed yeast beta-glucan from baker's yeast (Saccharomyces cerevisiae) twenty years ago, and now it is widely used in a variety of foods. 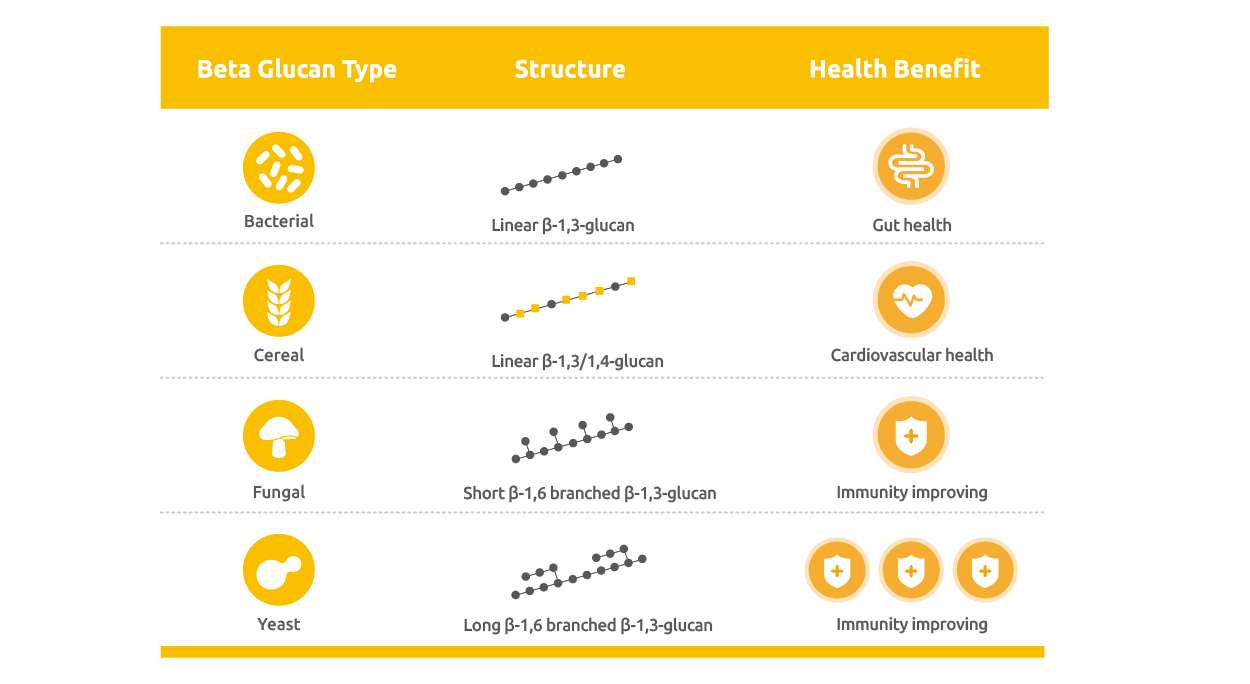 Beta-1,3/1,6-glucan derived from baker's yeast (Saccharomyces cerevisiae) is the most studied beta-glucan and by far the best documented in terms of immune stimulatory efficacy, mode of action and safety, and is hence considered superior to beta-glucans from other sources.

Angel Yeast beta-glucan is a long chain of polysaccharide. It contains the main chain of β-1,3-glucan and branched chain of β-1,6-glucan, the molecular weight is around 500-1000KD.

The gastrointestinal tract is an important immune organ in the body, rich in dendritic cells and macrophages – innate immune cells that continuously monitor the components that pass through the gut. Equipped with specialized pattern recognition receptors (PRRs), these immune cells can recognize and respond to structures typically found in harmful microorganisms. When ingested, yeast beta-glucan binds to the PRRs on the surface of these immune cells. This binding alerts the immune cells and triggers a series of biochemical events that renders the immune system more potent. Thus, yeast beta-glucan simply boosts the immune system to enable it to react quickly in the event of an infection, supporting overall health and well-being.

Immune health is key for all age groups, regardless of lifestyle, age or profession. It is becoming an important topic especially with today's engaged and often challenging lifestyle. Therefore, products with ingredients that boost the immune system are currently attracting a lot of attention. Target groups for this topic are not only elderly people or children, but also sports people as well as stressed people to improve their immunity.

Bettcan yeast beta-glucan is produced in accordance with the highest certified quality standards. Moreover, it is Kosher and Halal certified. It is safe for people with yeast allergy, because those components in yeast which may cause allergy are completely removed during the production process. As a pure and natural ingredient, it can also be used for vegetarian and vegan products.

Sports nutrition products are now attracting a wider audience of health-conscious consumers. A well-functioning immune system is crucial for athletic performance as well as for an active lifestyle. Yet, exercise in itself has impact on the immune function. Research has shown that intensive exercise suppress the immune system, compromising the body's ability to defend itself.

With the deterioration of the environment and aging, the sharp rise in chronic disease and health impairment will be a major global public health challenge. Malignant neoplasms, peptic ulcers, chronic gastritis, chronic nephritis, diabetes, rheumatoid arthritis, emphysema, chronic infections etc are associated with decreased body resistance in the elderly. By adding Yeast beta-glucan can improve the body immunity and resistance. Yeast beta-glucan in health food, dietary supplements is much common, mainly for immune regulation, anti-oxidation and other functions.

In the United States, yeast beta-glucan has been identified as GRAS (Generally Recognized as Safe), a food substance that is generally considered safe by the US Food and Drug Administration (US.FDA). It can be applied to a variety of foods, including baking foods and premix, beverages, cereals, dairy products, vegetable protein products, processed fruit juice, soft candy, soup, adding no more than 200mg per serving.

EU approved yeast beta-glucan as a novel food ingredient, including drinks and a variety of foods.

China also approved yeast beta-glucan as a novel food ingredient and a nutrition enhancer, can be used in a variety of food including larger infant formula milk powder.